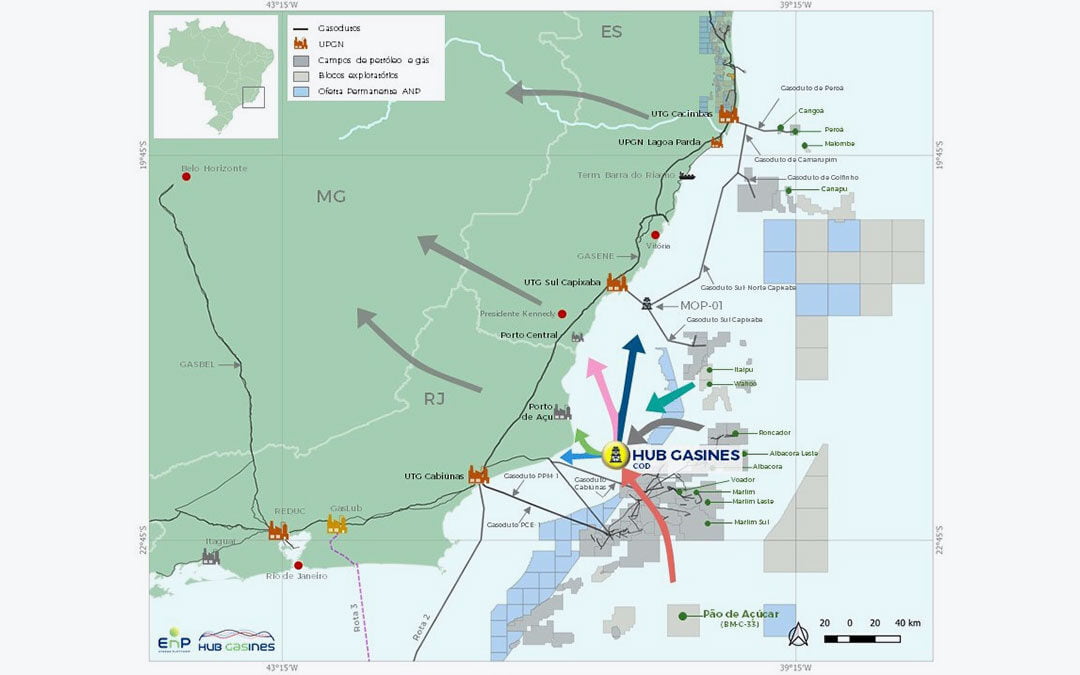 In the last 8 months, since March 2020, when the EnP Energy Platform was launched, our company has been dedicated to designing and articulating a competitive solution, contributing to the commercial viability of the gas produced on the coast of the Southeast of Brazil, both in the Pre-Salt and Post-Salt. Throughout this period, the project has been refined based on feedbacks received in presentations made to companies and government agencies.

In addition to technology, an innovation is in the management of the simultaneous use of different midstream assets, existing or planned, in the states of Rio de Janeiro, Espírito Santo and Minas Gerais and with indirect effects in São Paulo.

The heart of Hub Gasines is in shallow water, close to the border between the states of Espírito Santo and Rio de Janeiro, where a jacket (metallic structure) called COD (Operation and Distribution Center) will be installed. This plant will receive gas pipelines from multiple producers and will be able to transport, through different connections, gas to be processed in treatment units, located in Rio de Janeiro and Espírito Santo, existing or under project. The COD will be fundamental for new E&P operators, who tend to diversify with the divestments underway in the Campos and Espírito Santo Basins and with new discoveries, the result of several auctions since 2017, including what is expected from the Second Cycle of Permanent offer of the ANP.

Now we have reached a new phase, in which we are publicly presenting Hub Gasines with the aim of inviting investors to a highly attractive business. The next step is to establish an SPE that will carry out the licensing, the basic engineering project and, not least, define the business model that will competitively take more and more gas from the offshore to the Brazilian market.